JAMM in January - Continuing to Inspire While Tackling the Basics

Even though JAMM had used the paper violins to teach and reinforce bow and violin holding skills during the fall semester, Mr. Xia knew that the transference of these skills onto the real violin might take some time.  In order to keep our kindergartners inspired while focusing on these important details, Mr. Xia invited his younger chamber ensemble, Aurora Strings, to perform at our school before winter break.

During the performance, it was fascinating to observe how much more discerning our kindergarten audience had become since the beginning of the year.  They no longer sat in pure amazement, but rather watched as musical peers - studying each bow stroke, comparing violin stances and looking ahead to finger placement on the fingerboard.  Their comments reflected their own understanding of playing as a group - "I noticed how your bows all went in the same direction."  They saw how much Tazer had progressed since performing for them at the beginning of the school year.  This performance also carried much more significance and respect from our JAMM violinists. They sat as an audience knowing how much practice time is required to prepare for a concert and appreciated how long the Aurora Strings could stand and hold up their violins! 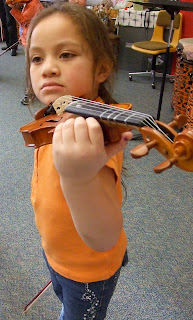 Returning from winter break, our kindergartners walked into violin class with a confidence and pride.  They were playing A String Concerto with long bow, holding up their violins for a class count to 100 and could identify which string Mr. Xia played on his violin with over 80% accuracy!  They learned how to place their fingers on each fingerboard tape.  The conductor of the Juneau Symphony had even paid them a special visit to see this up and coming group of young orchestra members.  They were invited to play alongside the Juneau Youth Symphony in March, and the youth symphony's director, Rick Trostel, had written a composition specially for them, called Life of the Child. They were playing music!
With this new-found confidence came a testing of boundaries.  For example, during Mr. Xia's instructions, students would sit on the floor with their violins in front of them.  They learned the routine of "spiders in your lap" or hands in your lap to help resist the temptation of touching the violins and it worked. But now that their violins made sound, several of our students began plucking the strings while Mr. Xia talked.  When a reminder didn't work, all it took was a warning that their violin would be replaced with a paper one until their hands learned to stay in their laps and the plucking immediately stopped.  Little did I know that the paper violin would serve so many purposes:  pedagogical tool, behavioral motivator and community builder.  Thank you, Josbel and the incredible teaching staff at Nucleo La Rinconada in Caracas, for sharing your paper violin process with us. 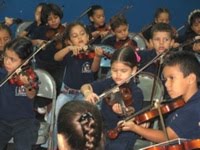